Preview Mode Links will not work in preview mode

Our first interview is with James Patrick, writer of Harley Quinn, Green Arrow, Star Trek, Batman, Death Comes to Dillinger, and much, much more!

Instead of attempting to livestream this year’s Classic Plastic Toy & Comic Expo, Rem decided to hit up a few tables and bother people for interviews! Pay close attention, kids. He’s really terrible at this, but had some great interviews! Listen to the audio above and read the transcript lovingly produced by Brandon!

Rem: We’re here at the Classic Plastics Toy and Comic Expo with –

R: James Patrick, creator of Hero Hourly and Impostor and 21 Pulp and all of that sort of thing. Writer extraordinaire! How have you been?

J: I’ve been doing great. This show has been wonderful.

R: Has it? So you said that you’ve been received really well. It looks like you have a primo spot here. So, uh…

J: This spot was actually the result of a mistake. So we’ll call it a wonderful mistake.

R: Oh really? That’s awesome. Good. Glad to hear it. So, what have you been doing since the last time we talked and what have you got going in the works?

J: Um, right now I have a bunch of pitches in at different companies. Companies people recognize. I can’t get into what I’m talking about what I’m working on yet.

R: Haha, aw man. You’re going to leave me hanging with that? That kind of sucks because I’m kind of excited about the Kaiju stuff. The Godzilla stuff, there was this, uh, I guess not a leak so much but they were talking about how in the credits, they released the credits –

R: For Kong, yeah. And they had some of the other TOHO monsters?

R: Gotcha. I haven’t seen Logan yet either, I don’t know if I’ll be able to see it in the theatres, but are you excited to see it as well?

R: Awesome. So is there anything else you’d like to NOT pitch to me that you’re not NOT doing?

J: (Laughs) No…Um, no I can’t get into specifics. If the wrong person…I’ll get in trouble. Um, let’s just say I’ve got a bunch of stuff out there I’m working on and I’m talking to different people about doing different things right now. So that’s pretty much all I can say. Um, that’s it for now. I’m working on a Kaiju book and I’m working on a book with the Devil and a couple other things. And that’s all, for now. That’s good enough.

J: Yeah. A devil Kaiju or something, I don’t know.

R: laugh Nice. So that being said since you have to keep everything hush-hush, you’ll keep me in the loop when you get something that you can actually talk about, won’t you?

J: Absolutely. When something develops and I can announce it, and I will. And I’ll tell you. I’ll phone you up and I will say “Remington, I…you are the first.”

R: Thanks a lot man, I appreciate it. If anyone wants to find you, where can they find you at?

J: Do you mean like at home? Like my address? Or do you mean at the show?

R: Yeah, I mean if you just want to give out your home address, your date of birth, your social security number or something like that?

J: Yeah, sure, whatever. No. Yeah if they want to come down to the Classic Plastics Show I’m here. I don’t know. Is this airing, is this live?

J: Okay, well like I told the other people at the other podcast. Everything is 90% off if you come down today. So come on down. Everything is 90% as long as you get here today. Also I’d like to say a big, big thanks out to Schmo from SchmoMo News because if people don’t thank her, well, she gets upset.

R: Yeah I was very upset I couldn’t make it here yesterday to see her in her Supergirl outfit. 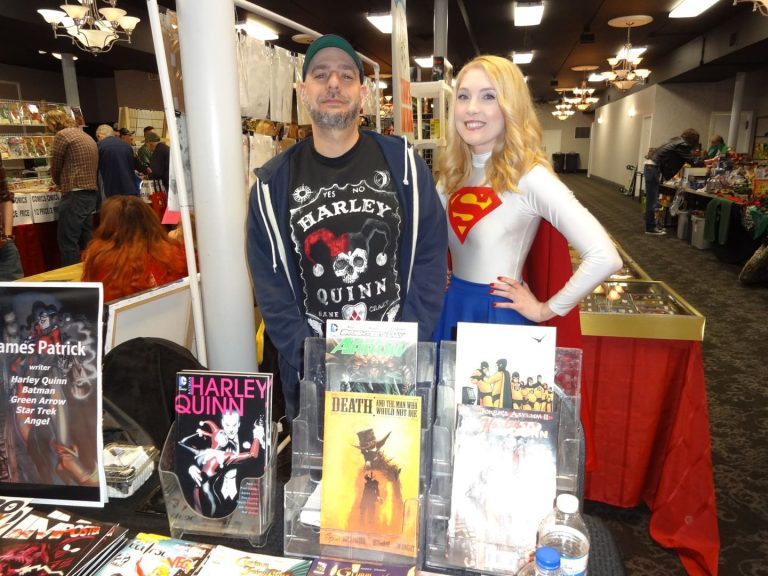 J: She looked amazing. There were a lot of cosplayers here who looked amazing, and she was one of them. And I encourage everyone to check out SchmoMo News.