Preview Mode Links will not work in preview mode

Our next interview is with novelist and great friend of the show, Terry W. Ervin II! Terry has written a ton of short stories (available in Genre Shotgun), a three-novel fantasy series (A First Civilization’s Legacy), a two-novel sci-fi series (The Crax War Chronicles), and his latest stand-alone Thunder Wells.

Instead of attempting to livestream this year’s Classic Plastics Toy & Comic Expo, Rem decided to hit up a few tables and bother people for interviews! Pay close attention, kids. He’s really terrible at this, but had some great interviews! Unfortunately, Terry’s audio was fell prey to the Dueling Ogres recording curse, but you can still read the transcript lovingly produced by Brandon!

Rem: We’re here at the Classic Plastics Toy and Comics Expo with the INCOMPARABLE Viscount Terry W. Ervin II. Terry how are you doing?

R: I’m great! It’s a pleasure to have made it here. I wasn’t sure if I was gonna even be able to. So how has it been for you these past two days?

T: It’s hasn’t been too bad. Pretty good traffic coming in and out of the place. I think Saturday was a little busier than Sunday, but that’s to be expected.

R: Right, this is the first year that they’ve done a two-day event. Even though Saturday was still a little busier than Sunday has been so far, did it still help – I remember last year was pretty crowded – did it help out with the traffic in general? Not feeling so congested?

T: Yeah I think the traffic was more scattered. Last year was crowded but they came in big groups. And then there would be dull times and then big groups, especially around the cosplay event and stuff like that.

R: Right. So have you been received well so far this year?

T: Yeah I can’t complain. Wouldn’t do any good if you complained anyway.  (laughs)

R: (laughs) Right. So you’re in a slightly different spot than last year. It looks like somebody grabbed a full-on table behind you, but your setup looks very nice and cozy and comfortable. [What’s been your big mover at the expo this year?] 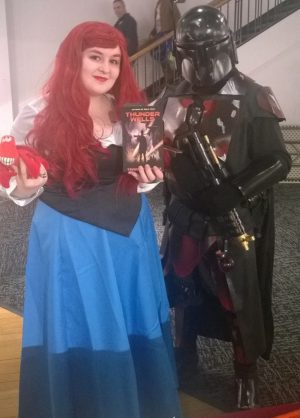 T: Okay well I can just tell you a little bit (laugh). This year Thunder Wells, my new book, is selling the best. I’ll end up posting – it’s already on my Facebook page and my blog – I got a new banner out in front of my table. The career center, the students put that together. So it’s kind of neat.

R: Awesome. So how has Thunder Wells been doing so far, just in general, not just at the con?

T: It’s done pretty good. It hasn’t taken off like Relic Tech, but sometimes standalone novels, they don’t always do as well as series and it’s just kind of a shot in the dark.

R: Right series are one of those things that if you know it’s a series, people look forward to that next thing to come out. So I can see where a standalone would be a little more difficult in regard to how it comes across. But go ahead and fill us in a little bit about the story of Thunder Wells.

T: Thunder Wells is a post-apocalyptic alien invasion novel. It takes place a little bit after the alien invasion has occurred and it centers on Jack, who’s like a college sophomore just trying to survive and do what he can. Maybe just outlast everybody else. But then the army comes calling and asks for his assistance because he’s kind of stored up supplies and things like that, and he joins them in a last-ditch effort to try and save humanity.

R: Fantastic. I just bought a copy myself and can’t wait to get going in it. And for our listeners; there is a little surprise in store for me when I read it about the Dueling Ogres?

R: Alright, fair enough. Thanks a lot Terry! Is there anything else you want to add? And after that, where anybody can get ahold of your stuff?

T: Well I thank you for giving me the time of the interview, I appreciate that. And they can get ahold of my stuff if they go to my website “www.ervin-author.com” and they can look me up. Plus they can look at the Dueling Ogres website and I think you have a link there somewhere.

R: Oh yeah, you’re front and center. You’re our favorite, Terry! You’re always at the top of my list.